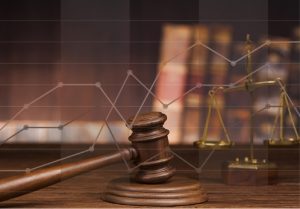 1) The economic analysis of law and judicial institutions.

Using the usual tools of economic analysis (microeconomics, game theory, theory of incentives and contracts, econometric or experimental methods), the aim is to study the effects of regulation and law on the functioning of markets or the organisation of specific activities and professions; to analyse and compare the impact of legal traditions and the organisation of the judicial institution on market and non-market activities; or to evaluate the effects linked to the dynamics of the evolution of legal systems (diversity, harmonisation or standardisation)

This body of work focuses on the foundations of imperfect competition (game theory concepts, conjectural variation approach) and on the manifestations and consequences of market power in decentralised economies. Thus, the modelling of strategic interactions concerns complex market universes where markets are interconnected. The models analysed also highlight possible market failures due to imperfectly competitive behaviour. Public policy proposals can also be studied.

The members of the DIRIS Axis maintain close relations with associations or learned societies, such as the Association Française de Droit et Economie, the Italian Society of Law & Economics, or the German Law & Economics Association or thematic networks such as The Competition Law and Economics European Network. They also play an active role in the animation of some of these associations (Chair of the Center European Program in Economic Theory; General Secretariat of the European Association of Law & Economics), and participate in the editorial board of academic journals (International Review of Law and Economics, The Review of Finance and Banking).

Interactions with the economic and social environment

Two young researchers of the DIRIS axis have recently been distinguished by the French National Research Agency, which granted them funding for their projects, bringing together multidisciplinary teams: Alessandro MELCARNE (ANR JCJC 2017: Labor Justice in the XXI century), and Benjamin MONNERY (ANR JCJC 2018: Political Behaviour and Electoral Accountability)

The DIRIS-EconomiX axis is also responsible for the Observatory of Disparities in Criminal Justice, a project funded by the COMUE Université Paris Lumières over 2020-2022.

Finally, close links are maintained with legal professionals and economic and judicial experts. Representatives and advisors to French and European regulatory authorities and consultants are regularly associated with events organised by the DIRIS axis and lead workshops and working groups in the framework of training courses in which members of the axis are involved.

The DIRIS team is strongly involved in the Master’s degree in Economics of Law at Paris Nanterre. This Master’s programme offers training based on the complementarity between economics and law. The Master 1 offers integrated teaching (500 hours) in economics and private law on major issues (competition, contracts, justice) which are addressed in their national and international dimensions, combined with rigorous learning of quantitative economics methods (risk assessment, econometrics). The Master 2 (340 hours) offers a course in “Economic Analysis and Impact of Law”, which deals with the specific problems of legal economics and gives the mastery of its qualitative and quantitative tools (comparative analysis of justice and legal systems, evaluation and impact methods). These tools are used to analyse different dimensions of competition (competition policy, intellectual property, digital technology, public/private partnerships) in a true bi-disciplinary perspective of economics and private law. For more information: Master Economie du Droit, and Association d’Economie du Droit de l’Université Paris Nanterre. The members of DIRIS are also involved in other Master’s degrees such as the Master’s degree in “Economic Analysis and Policy”, or the Master’s degree in “Risk and Environment” (ISEFAR), a course in Statistical and Economic Engineering of Finance, Insurance and Risk.

At the doctoral level, DIRIS members have developed a partnership with European universities (currently: the University of Turin and the Anglo-American University of Prague), in the framework of a doctoral programme “Institutions, Economics, and Law”.

© Copyrights Economix2023 – All rights reserved – Legal notices – Site map – Connexion – Credits – Personal datas
We use cookies on our website to give you the most relevant experience by memorizing your preferences and repeat visits. By clicking on "Accept all", you consent to the use of ALL cookies. However, you can visit "Cookie Settings " to provide controlled consent.
Cookies settings Accepter all
Manage consent

This website uses cookies to improve your experience while you navigate through the website. Out of these, the cookies that are categorized as necessary are stored on your browser as they are essential for the working of basic functionalities of the website. We also use third-party cookies that help us analyze and understand how you use this website. These cookies will be stored in your browser only with your consent. You also have the option to opt-out of these cookies. But opting out of some of these cookies may affect your browsing experience.
Necessary Always Enabled
The necessary cookies are absolutely essential for the proper functioning of the website. These cookies provide the basic functionalities and security functions of the website, in an anonymous form.
Functionnal
Edit | Quick modification | To delete Functional cookies help perform certain functions such as sharing website content on social media platforms, collecting comments and other third-party functions.
Performance
Performance cookies are used to understand and analyze the key performance indexes of the website which helps in delivering a better user experience for the visitors.
Analytics
Analytical cookies are used to understand how visitors interact with the website. These cookies help provide information on the number of visitors, bounce rate, source of traffic, etc.
Other
Other uncategorized cookies are those that are being analyzed and have not yet been categorized.
SAVE & ACCEPT