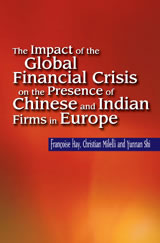 
This book investigates the presence of Chinese and Indian companies in Europe and the impact that the current global financial crisis has had on their corporate behaviour and strategies. Have investments been canceled or postponed? Has the crisis created new opportunities for investment? Is the behaviour of Chinese and Indian firms to these new circumstances similar? In addressing these challenging questions the authors used a proprietary data base encompassing more than 1,500 investments (greenfield operations, mergers-and-acquisitions, joint ventures, horizontal/vertical extensions) made throughout Europe by companies from China (Mainland and Hong Kong) and India since the 1990s. Comparisons were made according to several criteria – e.g. spatial patterns, modes of entry, sector and function distribution – to pinpoint differences and likenesses. In addition, face-to-face interviews were conducted in order to elaborate congruent case studies in traditional sectors (textile/clothing), or in new sectors (software for Chinese companies).
… The crisis had an impact on both investors in the following terms: lower amounts of investment, more merger-and-acquisition deals in absolute and relative terms, more focus on the largest economies (particularly the UK), and a targeting of specific assets such as critical technologies, international management capability, renowned brands and sale networks. In conclusion, in the years following the global financial crisis Indian investments in Europe have been more significantly affected than Chinese investments due, to a large extent, to the support of the Chinese state.